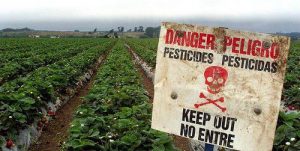 What people forget is that natural farming is actually the traditional way of farming. Industrial or conventional farming became the new norm for industrialized countries after the green revolution of the 1950s and 60s. This period saw the development of new seed varieties, and mass use of artificial fertilizers, pesticides and irrigation to produce higher yields.

Industrialized farming uses chemical/artificial fertilizers made from fossil fuel derivatives that are used to add nutrients to the soil. This results in a crop that is much lower in minerals and vitamins then it would be if it were grown naturally.

Natural farming nurtures the soil using natural fertilizers such as compost and controls invasive species through a mixture of companion planting, crop rotation, use of cover crops, natural pest control, hand weeding and animal grazing. Not only is this environmentally friendly, the nutrients in the crops are much higher therefore more healthy.

Industrialized farming may include the use of genetically modified organism (GMO) seeds. GMO seeds have had their genetic makeup changed in a lab to create foods that have certain desirable characteristics such as vegetables that take longer to go brown or are pest resistant. The use of GMO seeds is a contentious issue because we are toying with nature. The health and environmental impacts of GMO are difficult to predict and without appropriate monitoring systems in place, there may be issues we are not yet aware of and only time will tell after this generation has consumed GMO foods for an entire lifetime.

Research is linking the increase of brain issues like autism to the increased consumption of GMO foods by both the child and mother.

Natural farming does not allow GMO seeds and requires seeds to be naturally grown. Narural farmers will often save seeds from previous crops and use rare and heirloom seed varieties, preserving the biodiversity of our food.

Industrialized animal farming allows the use of antibiotics and hormones as a preventative measure. Initially it saves the farmers money by not losing sick animals but the meat is now laced with residues of which end up being consumed by humans. Scientist believes that this is directly responsible for pre puberty and increased cancer rates in humans. Industrialized farming also allows factory farming and practices that compromise animal welfare.

Natural animal farming uses natural feed for the animals and does not allow the use of antibiotics or hormones. Regulation certifications also include strict animal welfare regulations.

Harmful to the Environment

Soil and Water pollution. Rain and irrigation can lead to agrochemical run-off, which contaminates waterways and causes adverse impacts on aquatic ecosystems as a result of toxic effects.

This includes blue-green algae blooms that are so dangerous they can sometimes be fatal to livestock, wildlife, marine animals and even humans. A build-up of chemicals in the soil can impact plants, which in turn can be transferred to wildlife and humans who eat the plants.

A local example of this is the Great Barrier Reef, where research shows that runoff from fertilizers used at nearby farms is adding nitrogen and phosphorous into the oceanic ecosystem, causing massive algae growth that leads to depletion in oxygen available for other creatures and decreases the biodiversity in those affected areas.

Land degradation. Soil and land degradation is caused by human mismanagement of soils, mostly due to agricultural activities including the use of agrochemicals in farming. A report on the global assessment of soil degradation states that ‘the earth’s soils are being washed away, rendered sterile or contaminated with toxic chemicals at a rate that cannot be sustained’.  Today almost a quarter of the world’s farmland is affected by serious degradation, up from 15% two decades ago.

A Food and Agriculture Organization (FAO) study indicates the world may currently be losing about 1% (50,000 sq kms) of its farmland annually, due to a combination of degradation, urban sprawl, mining, recreation, toxic pollution and rising sea levels

Synthetic fertilizers and pesticides are derivatives of fossil fuels, including oil and natural gas. The use of fossil fuels is one of the main reasons the earth is experiencing dangerous climate change.

We are thankful that the demand for healthy food is increasing but the requirements and obligations for the primary producer also increase making it almost impossible to farm and meet the regulation load for organic certifications. The “all natural certified” option is enabling smaller farms to have an affordable option without mountains of paperwork.

It is best to buy local foods, if you have a chance to talk to your local farmers pick their brains about the red tape and cost behind being certified organic.

According to the Food Marketing Institute, the term “natural” is regulated when it comes to meat and poultry. The USDA Food Safety and Inspection Service requires natural meat and poultry to be free of artificial colors, flavors, sweeteners, preservatives and ingredients, and they must be minimally processed. Labels on natural meat and poultry should clarify the use of the term natural, such as there being no artificial ingredients. Using all natural meats and produce insures nothing unnatural has been added to the product, which is very important to human health, especially inflammation, gut flora, auto immune disorders and allergy disorders. The additives, preservatives, dyes etc. added to foods is now considered the number one cause of death and disease in the United States.