Debt And Depression – The Misery Cycle 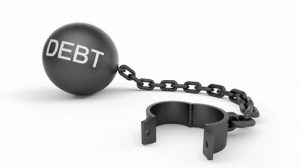 We’ve been through some interesting economic times, recently [1], and things still don’t look particularly healthy. One of the inevitable problems of living in a credit-based society is that a lot of people end up in debt. And debt is a huge weight on a great many minds. With mental health perhaps worse than it’s ever been, all over the world [2], the problem of debt, and the anxiety it brings in its wake, is one which those wishing to live a truly healthy lifestyle should address as soon as possible.

Depression is a horrible, horrible illness which leaches all the hope, happiness, and emotional nuances out of life. It’s a dreadful affliction – and it’s on the rise. More people than ever are suffering from depression, for reasons which are varied and complex. However, it cannot be denied that people in debt do have an extra risk factor for developing depression. It’s thought that nearly 9 in 10 people with serious debt problems also suffer from mental health problems [3]. Of course, the two feed off each other in many ways. Mentally ill people often fail to make payments as their world collapses into illness, and the stress of the debt exacerbates or causes mental health problems. Most commonly, depression afflicts those who suffer from debt problems. The constant strain of worrying about money, of being harried by creditors, of being pushed into poverty by repayments – it’s not a great recipe for emotional stability. This creates something of a vicious cycle, as depression by its very nature ‘paralyses’ people. It removes the motivation to do anything at all, let alone seek help [4] or take active measures to improve the situation.

So what is one to do to avoid this problem? Well, one solution is to live a credit-free life. Of course, in the modern world, this is not always possible. Much of the system in which we live is designed to make us reliant on credit [5], and the system punishes those who choose to buck this trend [6]. Without any credit record at all, it is next to impossible to get things like phone contracts and mortgages. However, if you can limit the amount of credit you use to that which is absolutely necessary, you will find a huge weight of stress lifted from you [7]. Many people don’t realise just how much emotional energy they’re putting into keeping up repayments on cards and loans. Finding yourself without having to think about what needs paying off, and when, clears a lot of headspace and reduces a significant amount of stress. Furthermore, only using money that you actually have brings with it a certain sense of satisfaction – using credit always comes with a degree of residual guilt [8] which, though perhaps not justified, does have an impact upon one’s state of mind.

How Can It Be Done?

If you want to simplify your economic life, and get rid of the burden of credit, it can be as easy or as difficult as you make it. The first step is to reduce your credit options, which you can do by binning credit and store cards. Then you must make efforts to pay off any remaining balance, in order to start truly reaping the benefits of a credit-reduced lifestyle. You may want to hang on to one credit card, in case of emergencies – but keep it locked away to save you from temptation! If you have trouble paying off your balances, there are charities who can help. Beware, however, of debt management companies who charge a commission – there are charities out there who will take care of your problems and help you pay off your debt in manageable amounts for free.

[2] Natasha Devon, “Here’s the proof that British mental health is worse than ever”, The Independent, Feb 2016

[3] Neasa McErlean, “Debt and depression: Twin evils that need to be fought together”, The Independent, Nov 2011

[7] Stepchange, “Debt in Mind. It’s time to take control of your debt and stress”