Why Buy All Natural Pork? 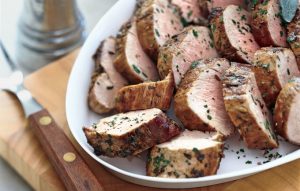 Pork is the most widely eaten meat in the world, making up about 38 percent of meat production worldwide. The cost of bacon has increased dramatically this year due to the high demand. Some may blame this change on low carb diets including Atkins and the Paleo lifestyle. It’s especially popular in East and Southeast Asia, Europe, Sub-Saharan Africa, North America, South America, and Oceania.

No matter how you think about it, pigs are rather dirty animals. They’re considered the garbage and waste eliminators of the farm, often living in dirt and feces and eating literally anything they can find. This includes bugs, insects and whatever leftover scraps they find laying around, but also their own feces (not intentionally), as well as the dead carcasses of sick animals, including their own young.

Anatomy of a Pig’s Digestion

The pig’s digestive system works very quickly and can actually cause the body to hold onto toxins in adipose (fatty) tissue that will later be consumed by the pork eater.

Conventional processed meats including bacon, sausage, hot dogs, and ham have been classified by the International Agency for Research on Cancer as a carcinogen. Someone who consumes over 50 grams of processed meat per day has an 18 percent increased risk of colorectal cancer.

According to the Centers for Disease Control and Prevention, H1N1 and H3N2 are swine flu viruses that are “endemic among conventional pig populations in the United States and something that the industry deals with routinely.” Outbreaks can occur year-round. H1N1 has been observed in pig populations since at least 1930, while H3N2 began in the United States around 1998.

Pigs carry many viruses and parasites with them. Whether by coming in direct contact with them through farms or by eating their meat, we put ourselves at higher risk of getting one of these painful, often debilitating diseases (not to mention put our bodies on toxic overload).

Pigs are primary carriers of:

It’s estimated that 70 percent of factory-farmed pigs have pneumonia when they go to the slaughterhouse. Unsightly factory-farm conditions of filth and extreme overcrowding lead pigs to have an extreme likelihood for serious diseases. The conditions are so bad that the only way to keep these pigs barely alive at times is to misuse and overuse antibiotics. I’ve talked a lot about what this does in humans. Similarly to humans, pigs are more commonly developing diseases that are antibiotic resistant. Super bugs are dangerous and contributing to a major drug resistant epidemic.

The bacteria-laden pork story continues. A 2013 Consumer Reports analysis of U.S. pork chops and ground pork samples found widespread (69 percent) presence of a bacteria called yersinia enterocolitica. This bacterium infects about 100,000 Americans a year, especially children, and can cause fever, diarrhea and abdominal pain in humans.

If all these concerns aren’t enough or you think you’ll avoid them by cooking your pork really well, then you should also know about the common conditions of pork raised for consumption. 97 percent of pigs in the United States are raised in factory farms. This means that these pigs never live a healthy life of fresh air and wide-open pastures.

These pigs spend all of their time in a crowded warehouses with no fresh air or exercise, fed a steady diet of harmful drugs to keep the pig breathing as producers make pigs grow faster and fatter. These drugs often cause the pigs to become crippled under their own excessive and unnatural weight gain.

Some people still enjoy the taste of pork and would like to continue to consume high quality pork products raised on a Certified All Natural farms. These animals are humanly raised, they have access to sunshine and open pastures and most importantly they are chemically pure meaning they are not raised with any antibiotics, growth hormone or steroids. The way that pigs and any animal are raised contributes to the health and quality of the meat we consume after they have been slaughtered.

The Best Cuts of Pork

If you are going to consume pork, a pork loin is the leanest cut followed by the center cut pork chop. If sausage and bacon are on your mind, then get it sliced without added nitrates and preservatives; the extra money spent is well worth it. Buying all natural ground pork and seasoning it with spices and no added nitrates or chemicals can make sausage.

Limit pork consumption to only 1-2 times per week and buy all natural pork that has no added nitrates, dyes or preservatives. Serve with fibrous vegetables and complex high fiber grains for a complete meal. On the days you do not consume all natural pork have natural beef, chicken and wild fish.

Seafood is not created equal, some international seafood markets have great deals on seafood, but they are coming from polluted waters that contain toxins and can increase risk for cancers and toxicity.

These fish: catfish, whiting, shellfish, mahi, tuna and cod are all wild caught by default but the geography of where they come from is the most important health concern. A reputable company will have 100% of their seafood USDA federally inspected. These fish are tested for contaminants and much safer. Also freezing and vacuum sealing the fish helps destroy any bacteria, again making them much safer and healthier.

WHERE DO CONTAMINANTS COME FROM?

Contaminants end up in water in a variety of ways:

Fish take in these substances in several ways, and their contaminant levels depend on factors like species, size, age and location.

Mercury, for example, is naturally converted by bacteria into methylmercury. Fish absorb methylmercury mostly from their food, but also from the water as it passes over their gills. Generally, larger and older fish have had more time to bioaccumulate mercury from their food and the water than smaller and younger fish. In addition, large predatory fish (like sharks and swordfish) near the top of marine food chains are more likely to have high levels of mercury than fish lower in marine food chains due to the process of biomagnification.

WHAT ARE THE RISKS OF EATING SEAFOOD CONTAMINATED WITH MERCURY AND PCBS?

Contaminants such as mercury and PCBs build up in your body over time and may lead to health problems, ranging from small, hard-to-detect changes to birth defects and cancer. Key facts:

WHAT ABOUT MERCURY IN CANNED TUNA?

The two most popular types of canned tuna – white and light – vary greatly in their average mercury content. Most people can safely incorporate canned light tuna into thier diet as long as they are mindful about which type and how much you (or especially your children) consume.

A word of caution: Some canned light tuna reportedly contains yellowfin tuna, which has similar mercury levels to albacore. These products are sometimes (but not always) labeled ‘gourmet’ or ‘tonno’, and their consumption should be limited by both adults and children.

If you are shopping for seafood a couple of things to avoid are strong fishy smells and do not buy marinade manager’s special, these items are about to expire and the price is reduced to move the product.