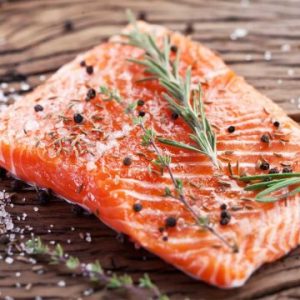 Farm raised salmon are fish raised at engineered aquatic farms. Virtually all salmon sold in North America labeled as “Atlantic” comes from farms, because the majority of the natural habitat of fish on the eastern side of the United States of America are no longer abundant. There is one major exception that i will detail at the end.

There is one major exception in the farm raised category. This farm is in Scotland and can be found at http://www.scottishseafarms.com/. Here the salmon are raised in the cold Atlantic Ocean in a hundred square mile area. They are fed no food and given no medicine. They only eat what is available in the ocean, mostly krill. When eggs are laid they are moved so they are not eaten and gradual moved back to salt water of the Ocean just like in nature. The ocean waters and Salmon are tested constantly for metals and other toxic elements. This is the only farm in the world that we found that is as natural and healthy as fresh caught and that is what we are proud to use and make available to our customers.